Amy Tong was reappointed as State Chief Information Officer (CIO) and California Department of Technology (CDT) Director by Governor Gavin Newsom to continue the statewide leadership she has exhibited since her original appointment by Governor Jerry Brown in 2016. In these pivotal roles, Amy, whose goal is to improve the State’s technology performance as an investment in its future, advises the Governor on the strategic management of the state’s technology resources. She provides the administration with best approaches to implement state technology-related strategic plans, policies, standards, and enterprise architecture while minimizing redundancy and cost for efficiency. A champion of user-centered design approach, her direct actions and focused leadership have been instrumental in modernizing the State’s project delivery, technology procurement, Cloud Smart adoption, open data, workforce development pipeline and cybersecurity measures. She is also the chair of California Broadband Council, a governing body with the mission to close the state’s digital divide. During her 25 years of government experience as a champion of data–driven decision-making, Amy has constantly looked to utilize new technologies, used responsibly by government, for the benefit of California residents.

Prior to her current roles, Amy was recruited by the California Department of Health and Human Services (CHHS) Agency as its Agency Chief Information Officer and Chief Deputy Director for the Office of Systems Integration. Using a modular procurement approach and agile methodology, Amy was instrumental in pivoting the Child Welfare Digital Services (CWDS) project from a monolithic approach to agile approach as state’s first demonstration effort.  While there, she also positioned the agency to be at the forefront of open data, which kick-started the current Statewide Open Data platform.

Before her time at CHHS, the California Lottery recruited Amy to be its CIO. Immediately, she was involved with improving customer engagement and the public understanding of the Lottery’s mission through digital services. In addition to ensuring the security and integrity of the lottery systems, her efforts included a complete revamp of its website to enhance user experience via customer-centric design.

The then California Board of Equalization, now California Department of Tax and Fee Administration, was Amy’s first constitutional office experience, and she was its first Chief Technology Officer. In that position, she learned many of the nuances unique to a constitutional entity and used data analytics as a means to help prepare for the modernization of this legacy system transformation.

During her service at the California Public Employees Retirement System (CalPERS), Amy demonstrated how the use of technology could bridge important gaps and serve as a business enabler rather than merely backend support. Later as Data Center Chief, she was on the front line of the massive CalPERS Pension System Resumption (PSR) project that replaced 49 legacy and 60 support systems into a single solution platform for managing members’ retirement and health benefits.

Amy spent 12 years at the Water Resources Control Board where she focused on data management and GIS visualization to help drive policy change. One of her accomplishments was being a key part of the team that worked with Lawrence Livermore Laboratories resulting in major policy change of removing Methyl Tertiary Butyl Esther (MTBE) from reformulated gasoline. MTBE was found to be a carcinogen that had leaked into the ground water supply.  GeoTracker, one of the few Software as a Service (SaaS) systems at the time, was developed for various water quality regulatory programs based on data and the GIS platform. Eventually, she rose to the position of acting CIO.

While busy overseeing the technology investment of approximately 140 state entities, Amy still finds time for outside volunteer work. She is a member of the California Northstate University Board of Trustees, National Association for the Advancement of Colored People, Asian Pacific State Employee Association, and National Senior Advisor for Asian Pacific Islander American Public Affairs Association.  She also served two years as the Planning Commissioner for City of Elk Grove.

She holds a Bachelor of Science in Management Information Systems and a Master of Business Administration from California State University, Sacramento. 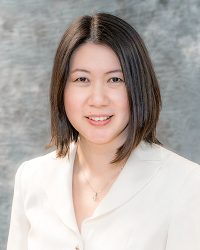